Birthmarks are common. Few have medical risks, or threats of turning cancerous. But prominent birthmarks, especially on the face, may elicit strong reactions from their owners, as well as those around them. Some individuals may have made peace with their birthmark and embrace it as part of their identity.  Some may feel that it affects their self-confidence and how others treat them.The key in the treatment of birthmarks is to make an accurate diagnosis of the birthmarks so that the most effective treatment can be implemented. Our plastic surgeons are highly trained and have extensive experience in assessing and treating birthmarks in both children and adults.

Broadly speaking, there are vascular or pigmented birthmarks. Vascular birthmarks, also known as Vascular Anomalies (VA), occur due to atypical development of blood vessels and appearances of VA varies widely, depending on the type of blood vessel involved. Pigmented Birthmarks are caused by the defective migration of pigment cells into the skin and a congenital naevus, or mole, is a common example.

Vascular anomalies (VA) are a complex set of birth anomalies.  The type of VA is based on the abnormal blood vessel of origin. Superficial flat lesions, such as Portwine Stain, Nevus Flammeus or Nevus Simplex, are treatable with laser therapy. These lesions are flat and may be purple, pink or red. In SW1 Clinic, we house the vBeam Perfecta, the most advanced Pulsed Dye Laser (PDL) Technology, which is the gold standard FDA approved treatment for vascular lesions.  This 595nm wavelength laser has high affinity for blood, effectively vaporizing blood vessels, over the course of the treatment.

The number of sessions of laser and the level of clearance we can achieve depends on the extent of the lesion, but improvement is usually noted after the first session. Numbing cream will be applied before the laser session to minimize pain during the treatment. Bruising is expected over the next few days.

For the removal of deeper and thicker VA, sclerotherapy injections and surgery are better options. The choice between these options will depend on the type of VA, size and location. Examples of these VA include Capillary Malformation (or Port Wine Stain),Venous Malformation, Arteriovenous Malformation and Lymphatic Malformation. On top of a thorough assessment, additional tests, such as an MRI, may be required to decide on the best course of treatment. 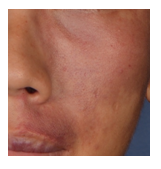 A common type of VA, known as Haemangioma, will resolve in 70% of children by the time they are 7 years old. Haemangiomas are usually monitored without any treatment, unless they cause problems such as bleeding, ulcers or affecting the child’s function. It is imperative to seek a doctor experienced in diagnosing VA, to avoid having your child undergo unnecessary tests and treatments.

The appearance of these birthmarks varies widely and may be:

Naevus sebaceous on the scalp. These lesions are light in colour at birth (left) and turns darker in colour (right) when the child reach adolescence.

Treatment of pigmented birthmarks, similar to VA, depends on the type of lesion, thickness, size and location.  Small birthmarks may be removed by laser ablation or surgery.  Larger lesions will benefit from multiple pigment laser sessions to gradually lighten the lesion or a series of surgeries to gradually remove the birthmark.  Congenital melanocyticnaevus (mole that a baby is born with) and naevus sebaceous have a low risk of cancerous change.